HHO Gas Technology in 2014 will be working on the Gasoline Vapor Carburetor that will be able to retrofit any engine from Carburetors or Fuel Injection systems to change the way we use fuel today.
A traditional gasoline engine using a carburetor or a fuel injector direct injection into the engine is not efficient enough. The gasoline fuel must be vaporized 100% all levels of all the gasoline must be cracked into a vapor form before reaches the engine. When this process of cracking all levels of gasoline fuel is done before the engine the gasoline is being used as it was intended to be in the beginning. If this process is not done it is turning your engine into a flamethrower out the exhaust valve. This is what your car is doing through a Carburetor or a Fuel Injector out your exhaust if your gasoline fuel is not consumed as a vapor.
Watch these 2 video as the liquid gasoline is projected and not totally vaporized.

25psi Compressed Gasoline Vapors
and 30psi HHO Gas Torch
Published on Sep 9, 2012
During this demonstration just for safety, I put the gasoline supply outside the garage  and I did have a fire extinguisher in case there was any mishaps. I was 100% sure that everything was going to go great. This demonstration was done for the first time without any practice run. You are viewing it for the first time as I was demonstrating it and doing it for the first time and each of us was experiencing it together. I am not an expert welder I do not know if I was mixing the fuel mixtures correctly but I was doing the best I could. I do not know if I was using too much HHO during the process I will have practices off-camera that will make me an expert. Like I have said in other videos, the last time I practiced welding was when I was in seventh grade and that was many many years ago. I consider myself a rookie when it comes to the actual welding process. But this demonstration was very interesting and a starting point for us using HHO and a fossil fuel in many different applications. Can you imagine having a dual fuel injector one delivering gasoline vapors or any flammable liquid in vapor form and the other one delivering compressed HHO to the engine cylinder through a dual delivery system per cylinder. I am just shooting ideas that we can all brainstorm and use gasoline and HHO more efficiently under compression and delivering it to the engine with super fuel efficiency. I do not recommend this experiment to anybody unless you have done something like this in the past like I have done in past videos using gasoline vapors and testing flashback arrestors. Never send the gasoline and HHO Gas through the same line if you do not know what you are doing. I can mix the HHO gas and gasoline together in my HHO machine because my machine is designed to work with a flammable liquid in the stainless steel bubbler chamber. During this experiment I wanted to run a control fuel mixture delivering the vapors independently to the torch having full control of the amount of each mixture to the torch.

Published on Jul 25, 2012 by hybrid4155
Boiling Gasoline in a soda can and capturing it in a balloon and hooking it up to a Automobile fuel injector demonstration.

Uploaded on Oct 7, 2011
I am demonstrating our new modification on the gasoline vapor carburetor for our first 1 gallon test run 10-6-2011 Part 3 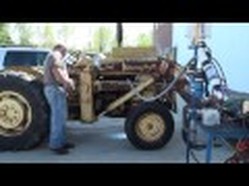 In the beginning of the video with me not being an expert in diesel engines I forgot to turn off the fuel injector pump. Eventually we seen the mistake and then we were running on the diesel vapor carburetor. This was our very first run and we never did this before and you are seeing it for the first time like we are doing for the first time. If there's any mistakes or problems we were seeing it and you are seeing it on video. We are happy with the results and now it is time to fine tune the system. After the video was completed we totally made some major changes getting rid of the flexible cap and change it over to a hard top and more. 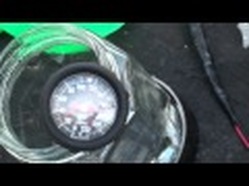 During this demonstration at Mike's Machine Shop we are not running any ultrasonic device during this test. We are running our Ring Bubbler only with our Copper Heating Coil that heats the liquid fuel that increases vaporization that improves the fuel efficiency with smooth and consistent run.

This is such an elementary demonstration if anybody Cannot see what is going on before their eyes they need mental help. There is no tricks or scams, it is for what it is and if you do not believe it you can duplicated for yourself and you will see it works. The copper pipe clears the hot plate by a 1/4 inch opposite of the exit to the yellow Piping to the engine. The air enters the top of the can is forced down on the hot plate with the copper pipe behind it causing a turbulence pushing the vapors to the opposite side of the exit of the Yellow piping. This process of the air entering the can on the top where the brass elbow is attached only forcing the vapors to circulate before exiting the only exit creates the proper vaporization of all the Fuel before it finds It's exit.

This is such an elementary demonstration if anybody Cannot see what is going on before their eyes they need mental help. There is no tricks or scams, it is for what it is and if you do not believe it you can duplicated for yourself and you will see it works. The copper pipe clears the hot plate by a 1/4 inch opposite of the exit to the yellow Piping to the engine. The air enters the top of the can is forced down on the hot plate with the copper pipe behind it causing a turbulence pushing the vapors to the opposite side of the exit of the Yellow piping. This process of the air entering the can on the top where the brass elbow is attached only forcing the vapors to circulate before exiting the only exit creates the proper vaporization of all the Fuel before it finds It's exit.

You are going to want to see the full Video entirely from beginning to end. Do not skip through the video or you are going to miss important issues. We highly recommend you to leave comments and ideas because this is the purpose of open sourcing allowing everybody to share in on the construction and development process.

Update number five on Pete and Mike perfection process of our ultrasonic and our compressed air circular bubbler gasoline vapor system to run generators. we have come a long ways in our process and we are still working on our gas delivery system so that the vacuum does not drag the gasoline from one chamber to the other chamber in the running process. The standard floats applied with the standard carburetor does not have enough buoyancy to overcome vacuum. We are looking at different delivery system of gasoline probably going with the electronic visual sensor with a time delay for delivering gasoline Air Pressure Valve opening closing the delivery of gasoline.

During this test tonight 9-1-2011 was our first test running on the ultrasonic Gasoline vapor carburetor with compressed air with the video camera rolling to capture every moment of the first run. This was a rough test working out many different ideas that was going through our heads. During the test we found out what side of the chambers need to be pressurize. The only side that need to be pressurize is the ultrasonic vapor carburetor side that which would pressurize the gasoline delivery system side. During our test we found out pressurizing the carburetor side forces the liquid over to the ultrasonic side where it is leaving the chamber through the top causing a continuous draft forcing the liquid from the carburetor side to the ultrasonic side. during our test the air pressure regulator valve brand-new out-of-the-box went bad. We are open-sourcing to get suggestions from you because this is the open-source form way for everybody to share ideas so that we are all consumers of the ultimate device that works for today.

I am demonstrating vaporizing gasoline, diesel fuel, rubbing alcohol on a hot plate. After we did a simple test we built I unit that was a dripping device and we were able to run a 5000 Watt generator off of the hot plate vaporize gasoline. We are working on our air fuel mixture. In our first test we were consuming gasoline but we will be working on reducing the gasoline consumption. We are researching patents how it was done through the super heating process of manifold heating concept of the delivery of fuel or any other means. To this day so far we are liking the ultrasonic delivery system and we are working on perfecting that one at the same time working on the electric hot plate or manifold delivery system. 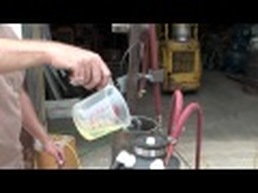 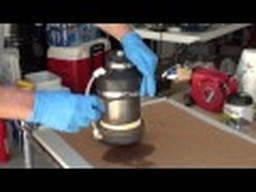 I Am Demonstrating My Gasoline Vapor Carburetor Component Assembly

Distilling Gasoline
Uploaded on Jul 9, 2010 by miltonSF
Here is the proof that the gasoline you use has additives mixed in the gasoline.